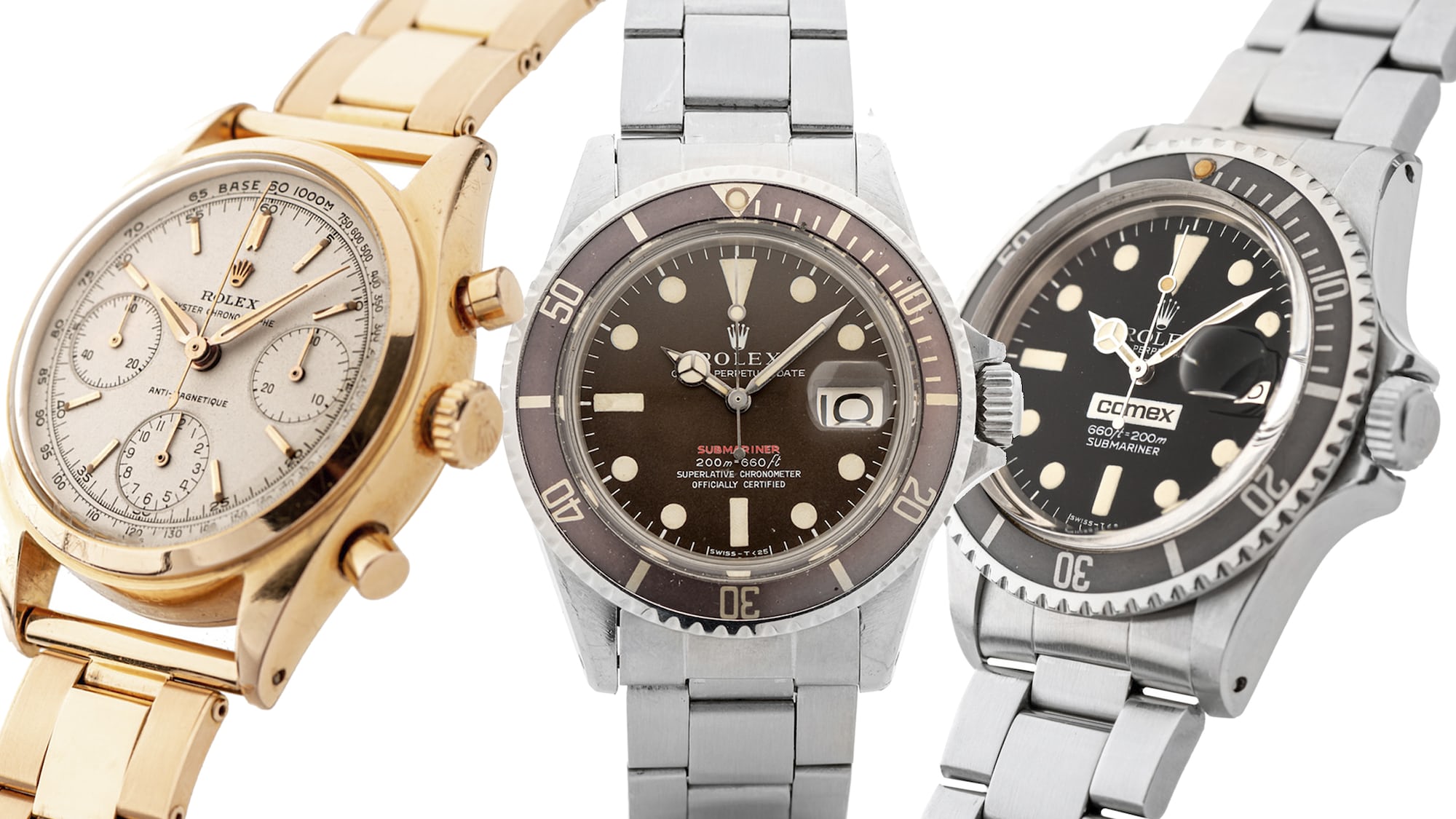 This past Sunday, Antiquorum held its Important Modern & Vintage Timepieces auction in Geneva. The event proved to be quite momentous, setting three new world records for a trio of vintage Rolex models. The record-setting watches were a rose-gold Oyster Chronograph 6034 from 1955, a COMEX Submariner 1680 from 1979, and a Mark II Red Submariner 1680 with a tropical dial from 1969.

This is not a collective achievement, but rather three distinct and individual world records set for each of the above-mentioned references with each watch far outperforming auction estimates. Now, you never know how a watch will perform at auction, so it is often best to project somewhat modestly. In this case, each of the watches exceeded the estimates by quite a healthy margin. Let’s take a closer look at each of these pieces and the individual records they broke.

It is not often you see a rose-gold 6034 show up at auction. We last saw a similar example, owned by Eric Clapton, up for sale some years back, but appearances of this reference in pink gold are seriously few and far between, and the auction prices are difficult to predict. The previous record held for this reference was from Christie’s “Evening of Exceptional Watches” from 2017 where it brought in $552,500 (approximately CHF 525,600). That watch, however, was a stainless steel example.

Now, at this past Sunday’s auction, this particular 18k rose-gold example was estimated to go anywhere from CHF 250,000 – 350,000. It ended up selling for CHF 600,000 which, as is obvious from the title of the article, is a new world record, exceeding the previous record-holding steel model by about CHF 75,000.

Just to show how rarely these examples pop up, a rose-gold 6034 was up for auction many years ago – in 2006 (before the time of the iPhone) –  as part of the “Mondani Collection of Rolex Wristwatches.” At that time, the watch – fitted to a leather strap –  brought in CHF 137,700.

Needless to say, this recent example of a pink-gold 6034 is a rarity on the auction circuit, and its price is the highest for any 6034 reference in any material. The 6034 reference – also known as a “pre-Daytona” – serves as the entrant into what would become the iconic Cosmograph/Daytona iterations of the Oyster Perpetual Chronograph line. This particular watch was presented at the auction in “Concours” unrestored condition, which is evidenced by the hallmarks on the lugs and on the back of the case and which are rare to see as they would normally fade with wear. The dial has a nice patina and features dauphine luminous hands.  The watch sports a gold riveted bracelet with no end-links, in full vintage fashion. The overall condition of this 6034 in rose gold certainly speaks to the final world-record sales price.

Who doesn’t love a COMEX Submariner? These stamped dial variants, made for the French Compagnie Maritime d’Expertises, have proven to be vastly collectible through the years. The watches are a pretty great example of the power of the stamp, as the watches themselves were created for a particular subset of divers with a specialization in underwater engineering. It is doubtful (although I’ll never say never) that any collectors of these watches have used them for their original intended purpose. You also might remember that in the very first episode of Talking Watches, John Mayer gave us a look at a COMEX Submariner 1680 from his personal collection.

Now, in terms of records set at auction, we must first look back to 2008 when a Rolex COMEX Sea-Dweller 1665 sold at  Antiquorum’s Evolution sale in New York for $248,800. However, if we are talking specifically COMEX-dial Submariner 1680’s, then the known record occurred in 2014 at Christie’s, where the watch brought in CHF 191,000. This brings us to the record-setting example from Sunday’s Antiquorum auction, which sold for CHF 524,000 –  more than double the standing record for a COMEX Submariner 1680.

It is said that only about 60 examples of the COMEX-stamped 1680’s were ever produced, making them quite rare. Adding to the rarity is the fact that, of those 60, many of the watches were serviced and the dials replaced with standard non-COMEX dials. This particular watch is unique for a couple of reasons. First, it was never used for diving. Obviously, it was meant to be, but it never made it into the water. What’s more, this watch had the original punched warranty card, an accompaniment seldom seen amongst COMEX-stamped watches because they were normally retained by COMEX and never given to the ultimate owner. Needless to say, this is a rare example of an already exceedingly rare watch. Sometimes, it takes a perfect storm to set a record, which appears to be the case here.

It would be a massive understatement to declare that the Red Submariner is a desirable watch. You need look no further than the watch itself to see why – that subtle red text simply elevates the watch to a different stratosphere. The Red Sub was the first iteration of a Submariner with a date and was produced from 1969 – 1973. For a watch with something of a short production run, it has a number of variants, making it one of the more collectible watches in vintage Rolex. When up for auction, it is the slight variations that can make a real difference. Interestingly enough, we do not have to look too far into the past to see the last high price for a Red Submariner 1680.

Almost concurrently with this auction, at the Geneva Watch Auction: XI, Phillips brought this very reference home at CHF 72,500. Within what appears to have been one day’s time, Antiquorum clocked in the world record at CHF 524,000 with this tropical example. Now, this may seem like a vast expanse in terms of the difference between the results of these two watches, but this particular Red 1680 has some unique properties which add to its record-setting price tag.

The whole watch, bezel, and dial have aged to a uniform tropical brown patina. The watch features a Mark II dial, which is signified by the meters first configuration beneath the Submariner wordmark. Other Mark II indicators are the open number six and the elongated “f” in “ft.” This particular watch comes complete with correct punched Chronometer certification and its original period-correct fitted bracelet from 1971. They literally don’t make ’em like this anymore, and to find one in such an honest and uniformly aged condition only adds to its record-setting performance.

Times are strange, and it really is a marvel that amidst great uncertainty in the watch world – and the real world, for that matter – that three world-record-setting Rolex sales would occur simultaneously in the same auction. It would be irresponsible to glaze over just how singularly unique each of these watches is in terms of condition and individual rarity, so it is hard to fault the outcome here. On that note, however, when it comes to vintage Rolex dive watches, the high-dollar sales prices almost always tend to go toward early gilt dial iterations. These two 1680 examples are not only not gilt, but also matte dialed with dates. In the past, these would have been somewhat undesirable from an auction perspective, which speaks even more to the significance of the prices they brought in. Adding to all of this is a report from Rolex Passion Report – albeit unconfirmed  – that Rolex may have had a hand in the results of this auction having directly bid on, and successfully won the bidding for, both the 18k rose gold 6034 and the COMEX Submariner 1680. While we do not know for sure if this did indeed occur, it certainly stokes the flames of excitement and intrigue surrounding the record-breaking weekend.

Now, an “un-dived with” COMEX Submariner 1680, a Tropical Red Submariner, and an 18k rose gold Oyster Perpetual 6034 is no collection to scoff at, so these three pieces are surely worthy of their newly crowned titles. Of course, records are meant to be broken. Judging by how quickly the Red Submariner, for example, set the new world record, only time will tell how long these three pieces will hold each of their individual mantles. Until next time.

Bernie Robbins Jewelers was started in 1962 by my in-laws, Bernie and Lorraine Robbins. Bernie’s prior experience was in major and small appliances. They started their business in a tiny alleyway in Center City Philadelphia. When I joined the company in 1966, the only hint of jewelry they were selling was a counter of Timex watches...

So, why navy blue? Or more specifically, why blue for the bezel and the dial, when so many past Black Bay models have only shown color on their bezels? For that, you can thank the French Navy, aka the Marine Nationale. So prolific was the Marine Nationale’s preference for using Tudor Subs as issued watches...