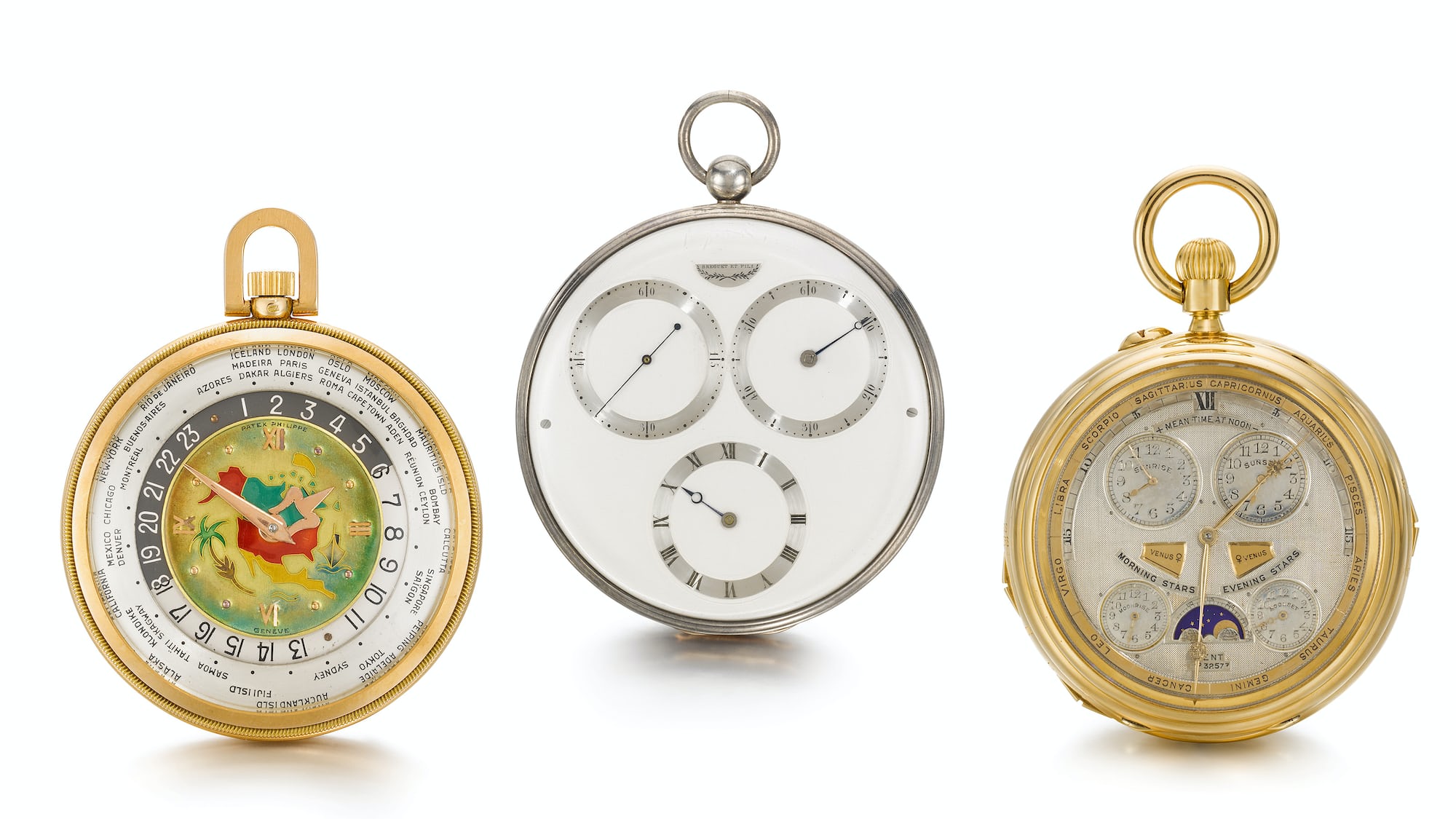 One of the (apparently) inalterable features of watch collecting is the degree to which, for the vast majority of mechanical watch owners, the history of watchmaking coincides with the invention of the wristwatch. This appears to be true even of serious enthusiasts and collectors, with the largest amount of attention and enthusiasm reserved for wristwatches from the period roughly between the end of World War II and the worst years of the Quartz Crisis, in the mid-to-late 1970s. And yet, of course, the wristwatch is a latecomer – this despite the fact that for most of us, “watch” is synonymous with “wristwatch.” So-called pocket watches have existed almost since the beginning of watchmaking itself (portable watches actually considerably pre-date the invention and widespread use of pockets), and they were for centuries not an antiquated predecessor to the wristwatch, but rather, the only game in town.

The fact that most of the attention of collectors and enthusiasts is on wristwatches does however mean that you can still get incredibly interesting pocket watches, many of which represent a degree of real horological content to which most wristwatches can only aspire, for relatively little money. The upcoming Sotheby’s online auction is a case in point – it is a veritable treasure trove of truly terrific timepieces, and while the auction is named for Abraham Louis Breguet and has several lots featuring the master’s handiwork, there are dozens upon dozens of other wonderful pocket watches with estimates, in some cases, as low as a few thousand dollars. Mind you, there are a few pieces with eye-watering estimates as well, but the auction overall represents an opportunity for the less-than-plutocratic among us to enjoy somewhat more democratic bang for the buck than one generally sees at auction these days.

There are, certainly, big-ticket items there in force, including lot no. 27, which is one of the superstars – a Breguet six-minute tourbillon, no. 2574.

As with every Breguet tourbillon, this one comes with quite a story behind it. This is one of Breguet’s so-called garde-temps watches, which were generally designed and made for a specific client with an especial interest in chronometry. No. 2574 was sold, in 1816, to Sir Thomas Brisbane, who was for four years Governor-General of New South Wales, Australia. The catalogue listing notes, “Sir Thomas was an avid astronomer throughout his life. Inspired by a near-shipwreck during his time in the army, he took it upon himself to learn navigation and nautical astronomy. He established two observatories in Scotland, as well as the first one ever built in Australia. Upon his return to Scotland in 1825, he established the Makerstoun observatory, where astronomers began making important magnetic observations in 1841. These results gained him the Keith prize from the Royal Society of Edinburgh in 1848. He was elected president to the Royal Society in 1833 and in the following year he acted as president of the British Association. In 1836, he became a baronet, and he went on to found two gold medals for the encouragement of scientific research.”

The watch has a number of unusual features – the frequency is unusually high for a watch of this period, at 21,600 vph. In order to conserve mainspring energy, the cage rotates at a speed of one revolution every six minutes, and it’s fitted with a Peto cross-detent escapement, a variation on the pivoted detent escapement invented by Earnshaw. At one point, this watch was part of Seth Atwood’s Time Museum collection in Chicago. (The collection was broken up and sold at auction, thereby depriving America of public access to some of the most distinguished watches and clocks ever made.)

The estimate for the lot is CHF 300,000-500,000 – a very great deal of money indeed, but by the increasingly absurd standards of wristwatch collecting, something of a bargain, especially for a watch which it would surprise no one to see Breguet bidding on for its own museum as well.

Breguet gets top billing in the auction, but there are other great names a-plenty, including an obscure but game little mom-and-pop business known as Patek Philippe.

This, lot no. 126, is a wonderful example of one of the most romantic modern complications. Patek’s ref. 605 “Heures Universelles” watches were made in quite small numbers, starting in 1937 and continuing for about three decades. This particular watch uses the bezel in order to adjust the world time indication – you turn the bezel to put your local reference city at the 12:00 position and then set the hands to local time at the crown, and the 24-hour ring shows the local time around the world in 24 reference time zones, each an hour ahead or behind its adjacent time zones. Relatively few of these pocket watches were made in pink gold (about a quarter of the total production, according to the catalogue notes) and an even smaller number of this reference had cloisonné enamel dials, which depicted stylized partial or complete world maps (this one shows North and Central America).

The catalogue notes also mention a quite cool little detail of the watch which I’d never noticed before. If you look closely, you can see that Paris and London are in the same time zone, which was not actually accurate for 1947: France had converted from GMT to CET in June of 1940 due to the opening of general hostilities in the European theater of war during World War II. Apparently, it was widely assumed, for many years after the war ended, that France would revert to GMT, and you can find Patek heures universelles pocket and wristwatches from as late as the 1970s that still have Paris and London in the same time zone (a testimony, perhaps, to the often remarked-upon Swiss suspicion of change).

These are very easy watches to love although, not unexpectedly, the cost of ownership is high – the estimate for this lot is CHF 250,000-350,000.

Dent is a name that is less well known than it should be outside a relatively small circle of specialist enthusiasts and antiquarian horologists, but perhaps lot no. 34 may do something to bring the name of this great English watch and clockmaker to better prominence (this is, after all, the firm that constructed the great clock for the Elizabeth Tower in the Palace of Westminster, which strikes the time on the bell known as Big Ben).

This is an extraordinarily complex watch in terms of complications – there are a total of 19 complications, most of them astronomical. The watch has two dials, and the complications include, in addition to the perpetual calendar and grande et petite sonnerie, several which are rarely if ever seen, including the times of moonrise and moonset, and indications for the morning and evening stars.

English makers, like their counterparts in America, were not as well known for complicated work (certainly there were major exceptions to this rule, including Mudge, who made the first known perpetual calendar watch), and this timepiece was the result of a three-way collaboration between Dent, the Swiss firm of Capt & Cie., and the watchmaker Léon Aubert of Le Brassus, a region which was very much ground zero for highly complex watchmaking when this pocket watch was completed in 1904. There is, fortunately, a good amount of documentation with respect to the collaboration, including the designs for the astronomical trains. The calculations for moonrise and moonset, in particular, are quite complex, and as far as I know, while there are a very few examples of moonrise and moonset complications in clocks and pocket watches, there are no examples of the complication in a wristwatch.

As with the preceding lots, this one is going to cost you if you want to add it to your presumably already extant collection of astronomical complications – the estimate is CHF 300,000-500,000 for lot no. 34.

Now, while I have started by saying that this auction offers some wonderfully appealing watches for the less than extremely affluent and then shown you three lots with low-to-mid six-figure estimates, let me leave you with one piece of evidence, at least, that I have not been stringing you along.

This pocket watch was made in Geneva by Albert Potter, who was one of the greatest American watchmakers of all time. Potter was born in New York and apprenticed to a manufacturer called Wood & Foley in Albany; he started under his own name in New York City in 1855. Much of his business there, as well as after his move to Geneva in 1875, was in repair and restoration, but he also made a small number of watches under his own name, which all show in common his love of chronometry and fascination with unusual bridge and movement plate layouts. His watches are all very beautiful and distinctive, and a Potter movement can be recognized immediately; his calibers resemble those from no other maker.

This particular watch uses his own patented version of the pivoted detent escapement and is, overall, a wonderful, idiosyncratically beautiful little machine. And the estimate is equal to or less than the price of many, many uninteresting and even mediocre wristwatches – CHF 6,000-8,000 which, given the beauty of the watch, the craft it represents, the history it represents, and its intrinsic horological interest, looks like a typo.

If you are so inclined, there are some other very appealing lots with even lower estimates, but if you ask me, this piece by Potter is at the far, far high end of bang for the buck. The entire catalogue is, naturally, online, and the auction begins June 3 at 10:00 AM EDT.

Best of Watchville: What’s The Attraction To Mesh Watch Bracelets?

Over on Quill & Pad, Elizabeth Doerr has penned an interesting article about one of the most popular types of watch bracelets for enthusiasts. When I saw this story on Watchville, I immediately clicked on it. While I’ve never owned any watches on mesh bracelets, also known as Milanese bracelets, they’ve long been a subject of...

I’ve yet to go hands-on with the Big Bang e, but from the looks of it, this watch seems to be made to the same standard as a conventional automatic Big Bang. And with that build, there does come a steep price tag, certainly by the standard of other smartwatches like the Apple Watch. The...