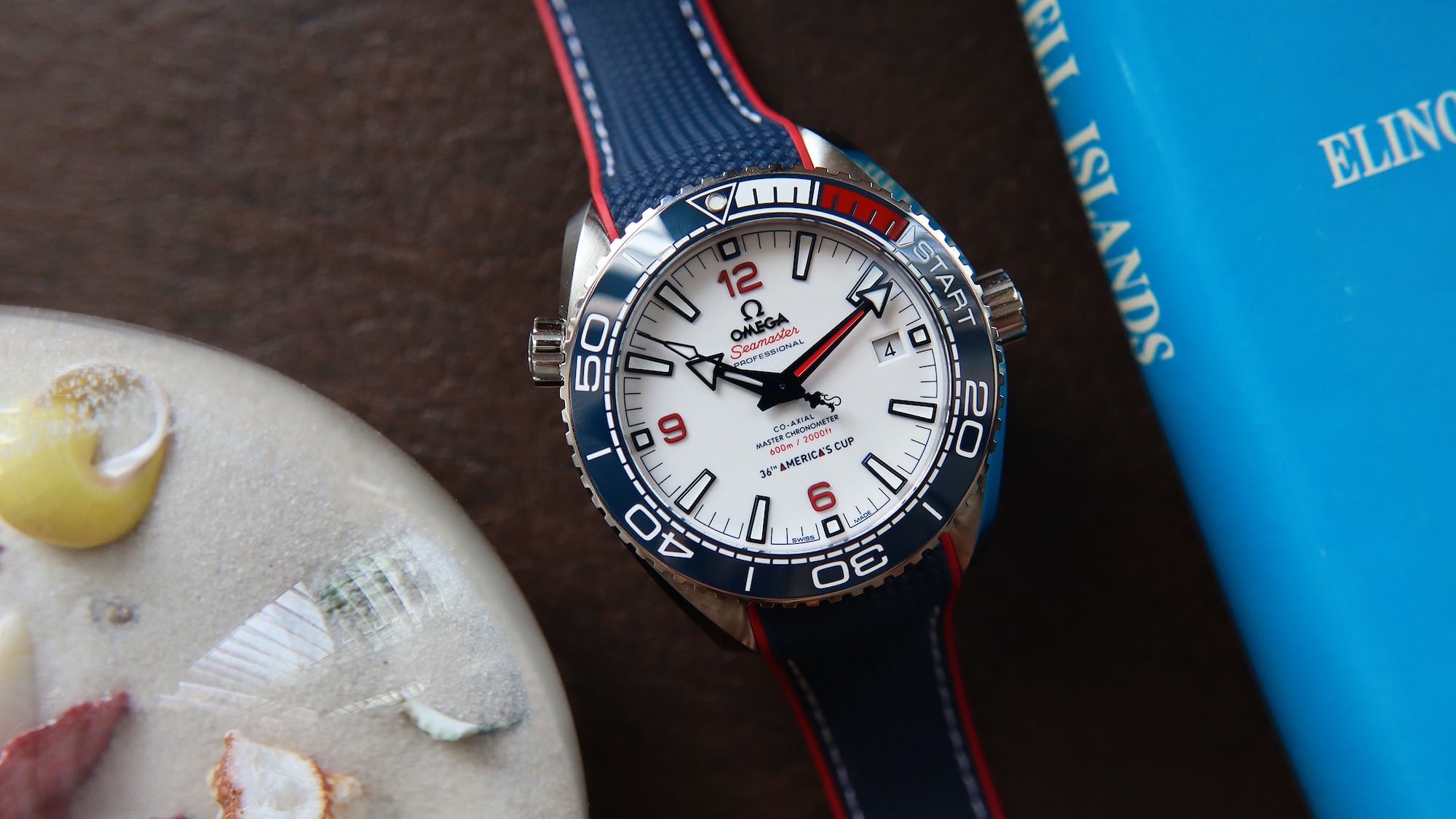 This year, Omega announced that it has been named Official Timekeeper of the 36th America’s Cup. For the past 25 years, the brand has been the watch on-board with Emirates Team New Zealand (ETNZ). Today, we go hands-on with a limited edition timepiece which celebrates that very partnership and the upcoming competition: the Omega Seamaster Planet Ocean 36th America’s Cup Limited-Edition

This is not the first time the brand has unveiled a limited edition watch to commemorate the America’s Cup. For the 35th America’s Cup in 2017, Omega released a commemorative Seamaster 300m, X-33, and Planet Ocean GMT 600m. That year, ETNZ won the competition, with the boat’s engineers sporting both the X-33 and Planet Ocean on wrist. Sponsoring the reigning champs and being named Official Timekeeper of the famed yachting event is big news. Omega has fittingly returned to quite a substantial and special watch to celebrate the occasion.

Having spent very little time with a Seamaster Planet Ocean 600m in the metal before, I was really struck by the quality of the watch. I mean, this is not to say that I expected deficiencies or something – this is Omega after all – but I have to say that the watch presents as a really well-built piece of horological engineering. Sure it’s got heft, but it is the little flourishes on the case, bezel, and dial that stood out. Things like the beveling, curvature, and mixture of brushed and polished surfaces on the case were really nice to observe in person as well.

Coming in at 43.5mm, this watch reads large on paper and looks large in the hand but, as they say, what really matters is invisible to the eyes. The way the lugs curve downward, and with the relatively short 44.8mm lug-to-lug distance, the watch feels more akin to a 41mm timepiece on the wrist. Even with the white dial – a feature that can often create the illusion of a watch wearing larger than it actually is – this watch never felt gargantuan or obtrusive. In fact, it was quite the opposite.

Looking at the dial, the Arabic numerals are actually blue with a red varnish on top. This produces a noticeable three-dimensionality which is quite striking. Turning the dial in different directions produces new and interesting viewing angles. I like to think this also has something to do with the size of the numerals themselves. The dial might be large, but the numerals are actually quite demure relative to the rest of the dial.  As a result, the numerals provide a nice pop of red as opposed to being the main attraction.

Between the red numerals, red minute hand, and thick blue surrounds on the hour markers and hands, viewing the time is easy. Now, I’m no yachting man (though I play one on TV), but I have to think such legibility is paramount and essential for elite yachting competition. The white dial has its own little quirks as well, depending on the light. Sometimes it has a smooth, almost lacquer-like texture, while other times it gives off the briefest indication of a silvered metallic sunburst effect. Both the Omega wordmark and logo are applied in blue. The blue application doesn’t necessarily shine or reflect, but rather exudes a shimmer or sparkling effect.

On the dial, the trapezoidal markers are white, lume-filled, and surrounded in blue, while at 12, three, six, and nine, the markers are square-shaped. Each of the markers are concave towards the center which provides some really interesting geometric detail to an otherwise straightforward aspect of the watch. The date complication – often a point of contention – works nicely here. The surface area of the date window appears to take up effectively the same space as any one of the numerals. In doing so, the overall layout maintains symmetry and consistency. Would it have been cool for the numbers on the date wheel to have been red, or even in a roulette-style layout? Sure, but as it stands, I still think the white on white works well.

The case is fashioned from stainless steel and ZrO2 blue ceramic. As with other watches from Omega, you can spot the discreet demarcation of the ceramic compound printed on the dial just beneath the “Professional” word mark. The bezel is, likewise, made from polished blue ceramic filled with white and red liquid ceramic for the diving scale. The colors on the bezel are both vivid and muted depending on the light. The red and white portion of the bezel functions as a yacht timer and represents the time allowed for participants to prepare pre-race, with the “Start” indication representing, quite literally, the start of the race. This is both a design and functional feature specific to yacht racing and is, of course, de rigueur on an America’s Cup limited edition timepiece.

The watch, of course, is powered by the Omega Co-Axial Chonometer Calibre 8900. This is a self-winding, anti-magnetic (to 15,000 gauss) chronometer-certified movement with a silicon balance spring and free-sprung balance. While the movement is chronometer-certified, it doesn’t stop there. Omega puts its movements through a second, more rigorous METAS certification process. This is all to say that this movement is really good, has serious horological chops, and is super accurate to boot.

The decorated caseback shows the famous “Auld Mug” trophy atop a blue screen with a wave motif and the text “36th America’s Cup, Auckland 2021.” This ornamentation obscures the ability to really view the movement. In a way, the inability to see the movement is fitting. A “true” tool watch generally shouldn’t have an open caseback, so in many ways, this is something of a hybrid – partly open, partly closed. I’m not sure that this was the intention, but that’s how I view it.

The strap is made of a soft structured rubber with a twin-trigger deployant clasp. I found it to be immensely comfortable, if not one of the most comfortable rubber straps I can recall wearing. It has a woven pattern with white stitching. It is very supple, which makes it easy to contour to any wrist once the sizing is right. The watch itself is a little bit top-heavy, but the ease of re-sizing via the deployant clasp, and the soft malleable nature of the strap, make finding a center wrist position and true size quite easy.

On the wrist, the heft of the watch vanishes. I have to think that, despite the diameter of the dial, that the shorter lug width allows for such an unexpectedly good fit. The watch looked and felt great on my wrist, and I am typically someone who taps out at 42mm. Even though this is a tall watch, the execution of the case, bevels, angles, and finishing masks any feeling of the watch being too tall. There’s no slab sidedness, and the helium escape valve on the underside helps to mask any perceived (or real) thickness.

The lume pip on the bezel is treated in green Super-LumiNova, as is the minute hand. This is significant because these are the two most important aspects of the watch from a timing perspective. The unidirectional bezel functions to orient the user to the minute hand which then tracks time along the bezel from its set starting point. Omega treats the rest of the markers in blue, including the hour and second hands, so that the green can be easily identified against them in low light environs. This is common practice within the Planet Ocean 600m collection, but no less useful for competitive yachting.

Overall, this watch is built like a tank. After wearing and handling it for a good spell, I had one consistent thought: This thing is robust and built to last. The watch has a lot going on, sure, but surprisingly, it all works cohesively. Omega delivered a wild and colorful design fit for ETNZ, but also one that can be enjoyed by anyone. The outdoors is where the watch really shines. The whites get brighter, the blues bluer, and the reds richer. While I might not be aboard with Emirates Team New Zealand next year as they look to take home “Auld Mug” once again, this watch will be. From everything I have observed, it should be a faithful companion for the voyage.

The HODINKEE Shop Is Now An Authorized SWATCH Retailer

The watch is being offered in two variants – one with a blue seconds arrow, and the other a red seconds arrow – both with no date window. Each watch will come with special packaging, in either blue or red, designed specially by the film’s production designer. The word tenet being a palindrome (a word...