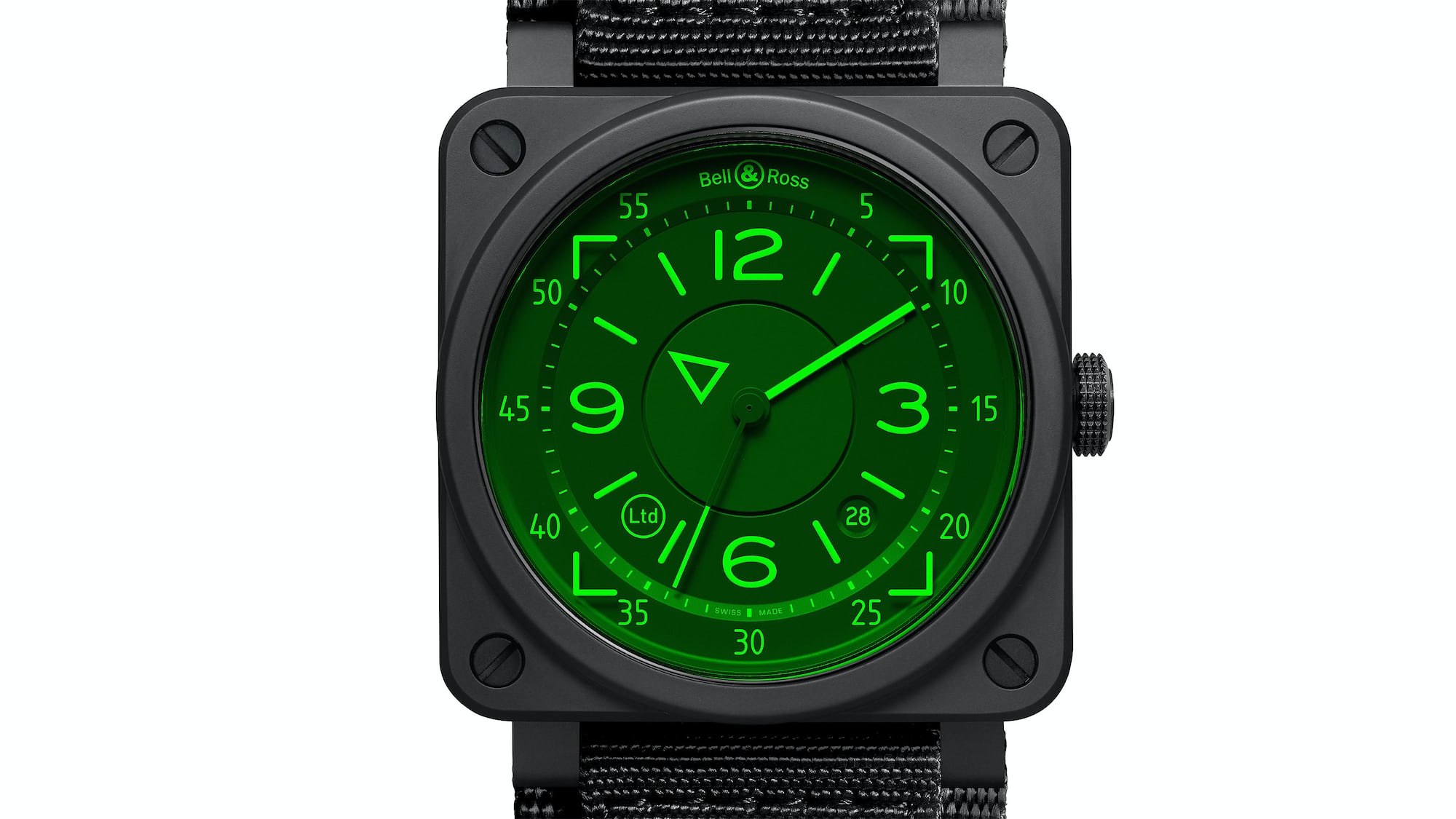 During WWII, the Spitfire, a UK-produced fighter aircraft, used a gyro gunsight mounted in the pilot’s line of sight in order to compensate for the target lead and bullet drop. This innovation eventually became what today is known as the Heads Up Display, a glass panel placed in the pilot’s line of sight that displays vital information so the pilot can maintain situational awareness by not taking their eyes off what’s in front of them. Ironically, wearers of the new BR03-92 HUD might look down at their watch instead of what’s in front of them.

The BR03-92 HUD features an aesthetic that takes cues from an airplane’s HUD. The crystal is tinted green and features the same 90-degree markers you’d find in a cockpit HUD. The hour hand is a marker printed on a rotating disc, while the minute and seconds hand take a more traditional approach. The matte-finished black 42mm ceramic case is shared with the rest of the BR 03-92 collection, but this specific HUD-inspired example is limited to 999 pieces.

Powering the watch is the caliber BR-CAL.302 automatic. It’s spec’d out with a date display and 40-hour power reserve. While a traditional HUD can deliver information about altitude, airspeed, heading, and horizon line, the watch displays the time and date. Luckily you don’t need a license to operate this piece of equipment.

Modern Heads Up Displays feature a Tron-like aesthetic that conjures up a futuristic vision of warfare – it’s become a symbol for next-generation aerial combat used in video games, movies, and pop culture. That’s because it’s also actually used in the skies above the battlefield. Have a look at the F-18 cockpit here and check out the HUD mounted above the instruments in all its green glowing glory. This is a simulator, but it mimics the real thing. Notice it doesn’t look much different than the HUD featured in Top Gun, released in 1986. Maverick flies the F-14, which was retired in 2006. The F-18 isn’t a “fifth-generation fighter,” in other words, the newest and most advanced fighter we have (those have a HUD integrated into the helmet), but it is a totally modern aircraft that’s still in service. The amount of information the plane is able to process has swelled dramatically, but the general look and feel of the HUD has not.

Bell & Ross’s stock-in-trade is recreating aircraft instrumentation on the wrist, and given the longtime role the HUD has played in military and civilian aviation, it’s a surprise this watch hasn’t come sooner. The look that we’ve typically come to associate with Bell & Ross is that of a “steam gauge,” named for its resemblance to a steam pressure gauge. These gauges are analog, like the past Bell & Ross watches that riff off the aesthetic. The BR03-92 HUD is also analog, but it’s modeled after a digital display, creating a fascinating interplay that looks to be executed in a rather sporty fashion. The aviation instrument homage is a go-to in watch design, but it really was Bell & Ross who pioneered the aesthetic and produced watch designs that were recognizable to those even outside the watch world. It’s easy for brands to fly off-course, but the jump to a HUD from a gauge design shows that Bell & Ross hasn’t veered from the original flight plan.